What an extravaganza! The confluence of Rosh Hodesh Tammuz, the Fourth of July and a visit by Shira (song) Specialist Rabbi Josh Warshawsky has infused our machaneh (camp) with even more ruach (spirit), excitement, song, and color than usual.  Here our chanichim (campers) in adat ha-Solelim are seen at a robust Shira session, led by Josh.  Josh works magic with all ages of chanichim and madrichim (counselors) by incorporating amazing original music, much of which he wrote, into both tefillah and shira.  His guitar accompaniment heightens the musical quality and is spiritually uplifting. Here’s Josh in action!  He taught the chanichim the songs that will be featured in our upcoming Zimkudiyah.  To learn more about Josh and his music, see his bio below*. 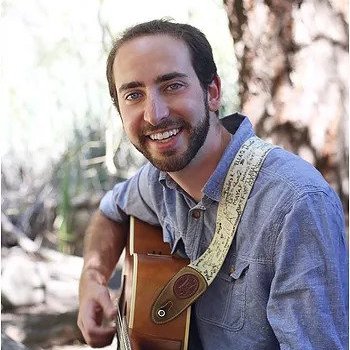 RABBI JOSH WARSHAWSKY INSPIRES AND ENGAGES JEWS ACROSS GENERATIONS THROUGH MUSIC AND TEACHING. JOSH IS AVAILABLE FOR ARTIST-IN-RESIDENCIES, CONCERTS, HEBREW SCHOOLS, TEACHING, AND MORE. CONTACT HIM FOR MORE INFORMATION!

Rabbi Josh Warshawsky was ordained at the Ziegler school of Rabbinic Studies in Los Angeles in May 2019. Before starting school, he worked for three years as the artist-in-residence and music specialist at Temple Beth Am and Pressman Academy in Los Angeles, CA, where he brought new musical energy to children and adults of all ages. He is a graduate of Columbia University and the Jewish Theological Seminary (List College) with BAs in Religion, Talmud and Rabbinics.

Originally from Chicago, Rabbi Josh Warshawsky is a graduate of Solomon Schechter and the Rochelle Zell Jewish High School. He has shared his original melodies with Jewish communities throughout the US and Canada. In 2013 he completed a 5-song EP of original Jewish melodies. This was followed in November, 2015 by his first full-length album, “Mah Rabu”, both of which can be found on iTunes. “Mah Rabu”, features such hits as “Mah Rabu”, “Kol B’Ramah”, and “V’ahavta”, which can be heard at Ramah and URJ summer camps as well as at NFTY and USY conventions across the country. This past May he recorded a live album of 11 new melodies for prayer and communal singing, which will be released in October.

For the past four years, Josh has served on the faculty of Songleader Boot Camp, where he helped to create a special track to bring together Ramah songleaders. This past year he piloted and ran the first ever Ramah-SLBC Shabbaton. Josh spends his summers in residency teaching and sharing music and Tefillah at Ramah camps across the country including Ramah in Wisconsin, Ramah Nyack, Ramah in Northern California, Ramah California in Ojai, Ramah Poconos, and Ramah in the Berkshires.

Check out his work here: