You could call it bashert: 15 years after a landmark decision in Judaism’s Conservative movement that paved the way for gay and lesbian students to enter its rabbinical schools and for rabbis to perform same-sex weddings, it would seem like destiny that two Conservative rabbis would wed.

Of course, it happened at Camp Ramah.

“It feels like we shouldn’t be groundbreaking,” Walker told the Jewish Telegraphic Agency. And yet she and Rosen made history as the first-ever same-sex marriage between two Conservative rabbis, according to Rabbi Ashira Konigsburg, the chief operating officer of the movement’s Rabbinical Assembly, who said the organization was not aware of any others.

The Conservative movement adopted legal rulings designed to make gay and lesbian Jews “feel accepted and welcomed” in its synagogues and communities. The next year, its two U.S. rabbinical schools admitted their first gay students. And in 2012, the movement issued guidelines for the first time for same-sex weddings, although many rabbis had been performing them already.

Now, openly gay Conservative rabbis work in a variety of settings — and while many have married, including to others who work in the Jewish world, none so far have paired off as Rosen and Walker did.

Until recently, Walker, 33, was the assistant rabbi at Toronto’s Beth David congregation; Rosen, 35, is senior Jewish educator at Hillel Ontario.

They met at a Rabbinical Assembly retreat in May 2018 for early-career women rabbis at the Isabella Freedman Jewish Retreat Center in Connecticut.

They first clicked as conversational partners in a workshop. On a hike, they ended up only speaking to each other. Then, they stayed up late talking at a campfire, long after everyone else went to sleep.

Both women grew up in New England, and knew of each other while undergraduates in the joint Jewish Studies program between List College and Columbia University.

Rosen was ordained by the Jewish Theological Seminary of America in New York in 2015 (she is one of four people in her immediate family to have attended JTS). Walker was ordained by the Ziegler School of Rabbinic Studies at the American Jewish University in Los Angeles in 2016.

GoldMarche, who married them, said she saw it coming that night at the campfire before they did. While Rosen thought she had made it clear she was queer, Walker says she hadn’t; Walker spent much of the retreat wondering if they were connecting as friends or something more.

Walker came out her senior year of college, while Rosen did a year after ordination. Rosen was living in Philadelphia then, and Walker in East Lansing, Michigan. In August 2018, Rosen went to visit Walker; she was the first woman Rosen ever dated. 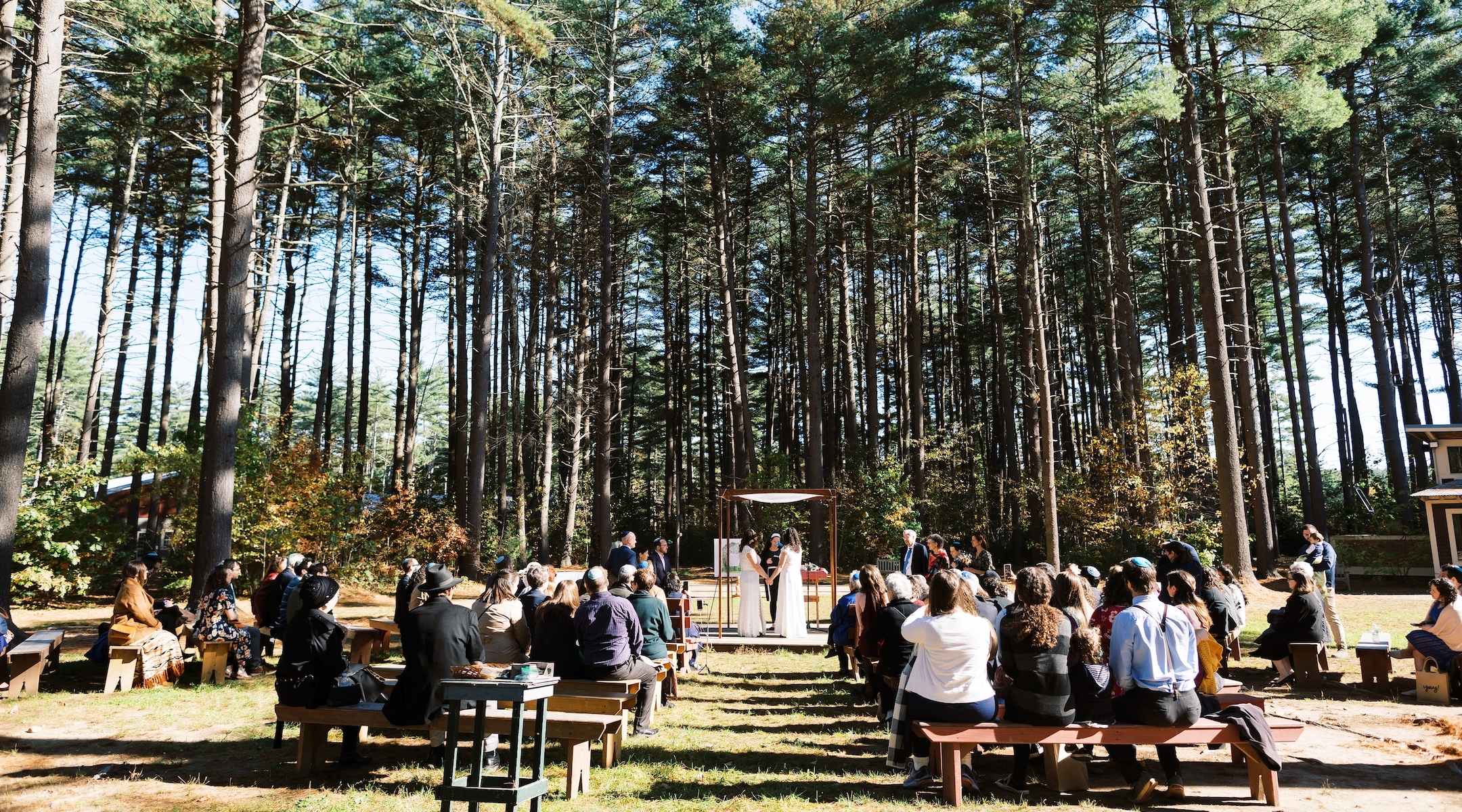 Their relationship began long-distance, with them either visiting each other or meeting elsewhere. In July 2019, Walker moved to Toronto. Meanwhile, Rosen had left Philadelphia for New York, planning to join Walker in the summer of 2020; that was, until the pandemic hit. Instead, they moved in with Rosen’s family in West Hartford, Connecticut.

“We made a major transition from long distance, to never not being together,” Walker said. “But seeing the ease of us doing life together, even with everything so hard around us, we felt that we can do this.”

They enjoy learning Torah together, or teaching a class together … sometimes.

“We don’t ‘rabbi’ each other,” Rosen said. “Since we’re both rabbis, it’s really important to be able to turn off that piece.”

They knew they wanted a proper wedding when it was safe to gather. But they also learned that Rosen could join Walker in Canada only if they were legally married.

So in May of 2020, their friend Julie Finkelstein, senior director of program strategy and innovation at the Foundation for Jewish Camp, performed a civil ceremony on a Brooklyn rooftop (Rosen was still a New York resident). They deliberately chose not to have a rabbi officiate, and, though they were legally married at that point, they refer to that ceremony as their “engagement.”

On Oct. 24, they had their Jewish wedding in the spot where Rosen attended Shabbat services as a Ramah camper. It was an egalitarian ceremony in which some blessings were changed to say “bride and bride,” and each woman broke a glass. There were around 100 guests, including – they estimate – 19 rabbis, one cantor and one rabbinical student.

They changed the traditional ring exchange language to what the Conservative movement calls a “brit ahuvot,” or covenant of love.

“It was a privilege that we carry, that others before us had already done the important work of creating a framework that felt meaningful for us, and viable for who we are,” said Rosen.

While most if not all of the guests were vaccinated, the ceremony, reception and dancing were all held outside, and apple cobbler was served in lieu of cake. The brides both wore Dr. Martens combat boots with their wedding dresses.

Speaking of the optics of a queer woman rabbi marrying two of her queer women colleagues,  Walker said, “I’m happy to have more people see this, as it makes people feel there’s a place for them, too.”